Ever since its establishment, Matsuya has continued to strive to use its environment to its advantage, with the Ataka Fishing Port nearby, to serve fresh ingredients and refine its skills to improve flavor. The rooms, designed entirely after traditional tea houses, provide a view of the mouth of Kakehashikawa River flowing into the Sea of Japan and the lighthouse; here you can enjoy dishes made with ingredients fresh from Kinkai in traditional dishware such as Kutani ceramics and Wajima lacquerware. Everyone at Matsuya welcomes you with open arms, and hope that you will stop by during your tour of the north for a special event, such as wedding ceremonies, auspicious occasion, or Buddhist service.

For those using public transit

Our establishment is easily accessible, as it is right next to Komatsu Airport, JR Komatsu Station, and the Komatsu Interchange.
For those using a taxi, please tell them to head for Matsuya in Ataka-cho. 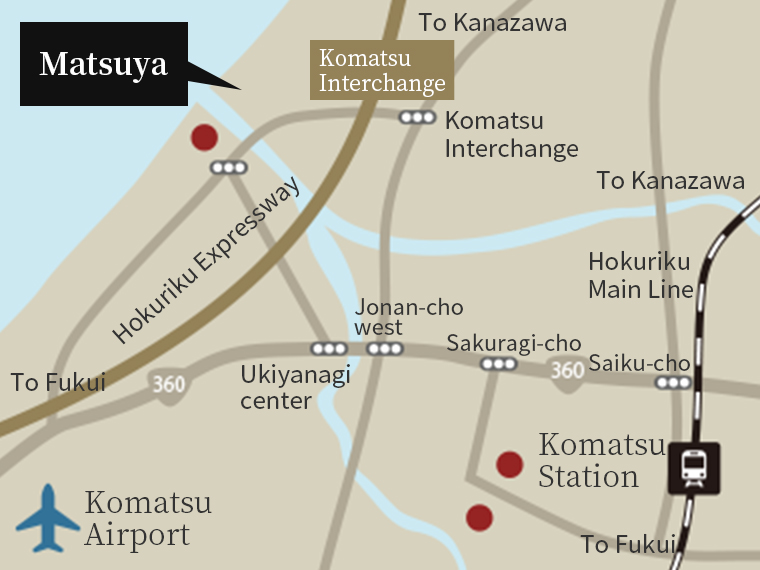 For those heading for sight seeing locations nearby 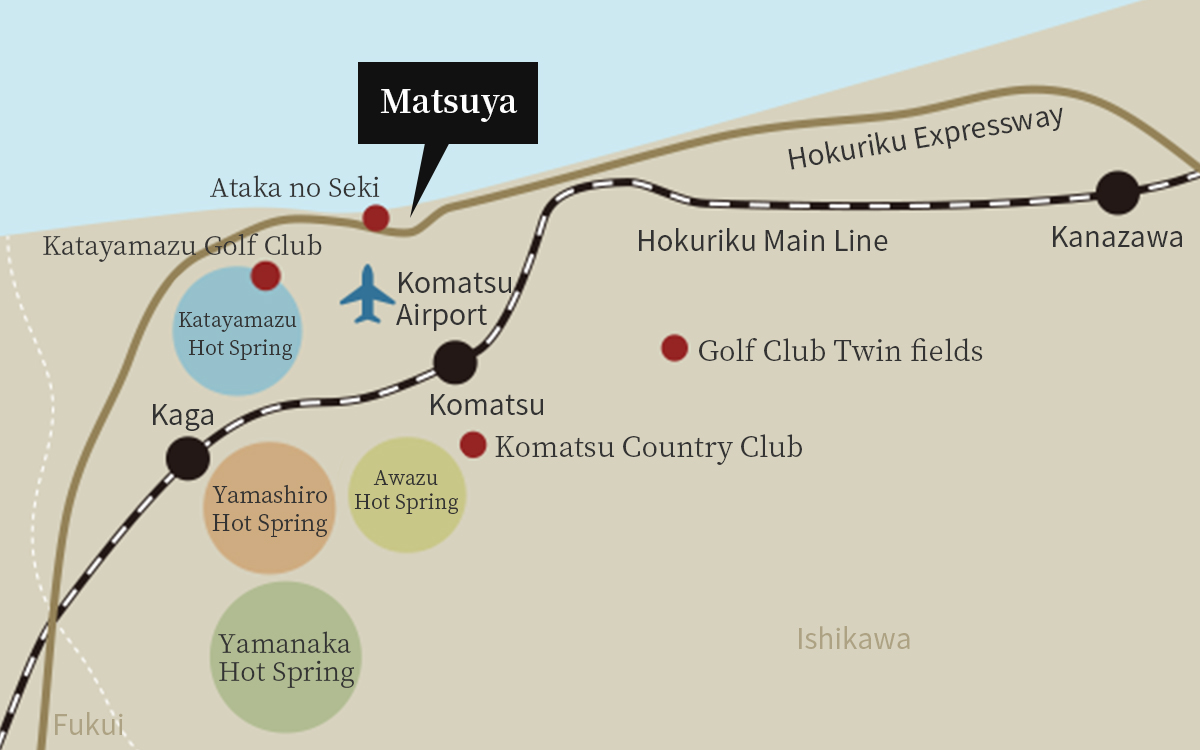 At Matsuya, we believe that serving the freshest ingredients from the Sea of Japan to be the greatest form of hospitality. We welcome customers to our establishment, which is based off of the traditional tea house design and has the aroma of the Japanese cypress, with a variety of rooms that show off the depth of Japanese architecture. Throughout our journey, we have established a number of famous dishes, and created countless menus to suit the needs of our customers; that is Matsuya hospitality. A part of our cuilinary culture is to refrain from eating that which is not in season; we wait for the season of each ingredient, and pride ourselves on using their natural flavor. We await your arrival with the spirit of Bimikyushin in our hearts.

Ataka no Seki – The Stage of the Kabuki Play “Kanjicho”

Ataka no Seki is known nation wide for being in "Kanjincho", which is one of the 18 finest Kabuki plays. A forest of pines continues to look upon the Sea of Japan after 800 years, within which stands the Ataka no Seki Barrier monuments, and bronze statues of Yoshitsune, Benkei, and the Barrier Keeper, speaking silently of tales of long ago to visitors into the salted air. The poet Akiko Yosano and her husband Tekkan wrote a 30 stanza poem about Ataka Sumiyoshi Shrine. A monument for the poem can be found on its grounds. Take the opportunity to walk the pine forest, feel the salty air, and look down at the sea of Japan, for a look at how things were in ancient times.

Behind Ataka is the sacred mountain, Mt. Shirayama, and has a port town at the mouth of Hashikakekawa River, which flows through the Kaga plains. It once was a port for cargo ships that would cross the Sea of Japan. At the Ataka fishing Port, you will find a number of in-season fish for the locals to dine on. This is only possible in port towns. Restaurants near the port offer luxurious, seasonal foods that match each season.

In 2017, Komatsu/Ataka was recognized as a Japanese heritage site for being a cargo ship port.
Traditionally, the town of Ataka was key in oceanic voyages, making it an important port where cargo ships could come to port, and was busy with items coming and going from all over the nation due to the success of the cargo ships from the early Edo Period until the Meiji Period.
One of the few powerful shipping agents, Kometani, started the Kometani Bank's (later, Kitakuni Bank) Ataka branch (the current Matsuya villa, Kisshoan) in the 24th year of the Meiji Period (1891), and has now been registered as a tangible cultural heritage property. It also forms one of nine pieces of cultural property that make up the Japanese cultural heritage site. The people who visit Ataka are able to sense the dramatic history of the cargo ships from the historic townscape and buildings.

“Kisshoan”, the Matsuya Villa, is a former villa of the influential shipping agent, Kometani, which started as the Kometani Bank, Ataka Branch (later known as the Kitakuni Bank), in year 24 of the Meiji Period (1891), and was registered as a tangible cultural property (building) on the first year of Reiwa (2019). It is currently used as a tea house.